“CITY MULTI offered simultaneous heating and cooling in a real way because of the heat recovery, and a more detailed level of zoning.”

The Covenant School was founded 30 years ago in Charlottesville, Virginia. The lower school, for students in pre-K through 6th grade, is located in a 65,000-square foot historic brick building dating back to 1935. With almost 300 students, faculty and staff members, the school needs to operate seamlessly. When an old boiler system became what board member Jay Taggart called a “ticking time-bomb,” the school knew a new heating system was needed. Variable Refrigerant Flow (VRF) from Mitsubishi Electric served as the ultimate answer to that need, providing zone control, air filtration and the added bonus of cooling.

Marvin Boswell, the director of facilities at the time, explained the team’s search for a new system: “Being cost-effective was the biggest consideration. We also wanted a system that provided cooling and heating since the building didn’t have air conditioning before, just window a/c units. Finally, we wanted a system that would provide more individual classroom control. Our previous system had one control—on or off—for the whole building. We didn’t have thermostats in the classrooms.”

To find a suitable system, the school called in Taggart, who is also the President of W.E. Brown, Charlottesville – the project’s installing contractor. The school asked Taggart to compare two systems and make a recommendation. He said, “We looked at a water-based chiller and VRF. Everyone agreed that ductwork couldn’t happen, and we were worried the roof couldn’t handle the weight of a chiller, so we came in with a CITY MULTI® solution. With CITY MULTI, there wouldn’t be nearly as much equipment on the roof as a water-based solution, making VRF significantly lighter. Also, CITY MULTI offered simultaneous heating and cooling in a real way because of the heat recovery, and a more detailed level of zoning. And because refrigerant piping is smaller than water piping, VRF offered a more compact solution.” Boswell agreed with the recommendation. 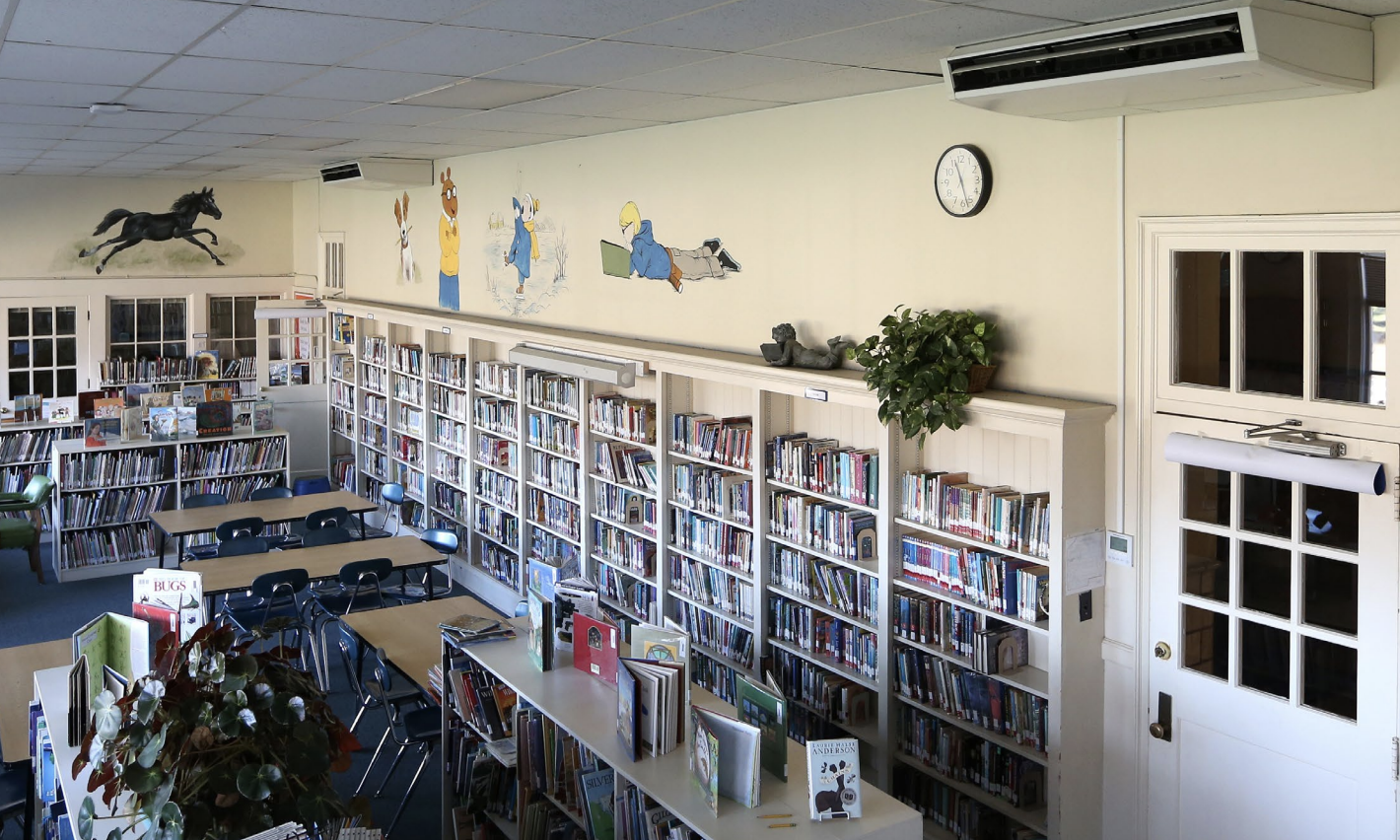 Taggart next reached out to the team at the Advanced Products Group (APG), a division of Aireco Supply, Inc.—the distributor on the project. Taggart said, “APG really stepped up and made this project happen—made sure we got what we needed. We really think of APG as a partner.”

The design that Taggart and APG developed involved installing 49 indoor units and three sets of twinned outdoor units – two sets on the roof serving 40 indoor units, and one set on the ground serving nine units. Taggart appreciated the ability to split the outdoor units and put some on the roof. “This was the perfect solution—out of the way so it wouldn’t get banged around, very easy to service and less likely to get vandalized.”

Installation had to take place over the summer while students were away. Boswell said, “The contractor assured us that a 60-day install was possible, and they were able to meet that schedule. The system was completely functional at the beginning of the school year.” He continued, “One of the early things we did was explain the system to the teachers—how it worked. They were very pleased to have individual controls within the parameters we’d set. They felt it would be positive because it would allow different temperatures throughout the building. Previously one area would be too hot while another was too cold.” “This was also the first time the building has ever been fully air conditioned,” added Taggart. Previously there had been no cooling in the hallways, bathrooms or stairwells. “This is a huge benefit to the school.” The VRF system has proven to be beneficial in the wintertime as well, successfully keeping the students, faculty and staff comfortable. Taggart said, “Despite years of cold winters with sub-zero temperatures, there’s been no back-up heat needed.” VRF also delivered discreet operation. Boswell said, “Previously, when the steam hit the diverter in the classrooms’ radiators, there would be a little racket. That went away with the new system. And the sound of the window air-conditioning units in the summertime, where you had to talk over them, that’s gone too. The noise level in the classroom with the new systems is desirable.” Taggart noted that removing the window units had two additional benefits: “The load on the electrical system decreased about 40 percent, which will extend the life of the system. And aesthetically the building looks a lot better—restored to its original look.”

Taggart continued, “This is the first time the building has ever been fully air conditioned or had air filtration, so the air quality has gone up drastically. Many teachers say they’ve noticed an impact on their health: fewer allergies and colds.” Between the improved indoor air quality, the year-round comfort and the increase in control, “the teachers love the new system. They absolutely love it.This project is a great example of how a building and technology mesh together—90 years apart. It shows how versatile the Mitsubishi Electric product is,” said Taggart. It is no surprise, then, that he calls this HVAC project “the best modification the school has ever done.”