“In less than two years, we already know that our new building uses 30 percent less energy than a conventional office building and much of that savings can be attributed to our intelligent HVAC system.”

Recognized around the world, the name needs little introduction. In 1996, at age 25 Lance Armstrong exploded onto the world stage winning a world championship, the Tour de Pont and multiple Tour de France stages. Only months following these victories, he was diagnosed with advanced testicular cancer which spread to his abdomen, lungs and brain. In early 1997 he founded the Lance Armstrong Foundation (LAF) to improve the lives of the 28 million people around the globe living with cancer. Six years later, in 2003 LIVESTRONG.org was launched as an online resource for cancer survivors.

After years of occupying generic office space in downtown Austin, Texas, the seven-time Tour de France winner decided that his foundation deserved a permanent home: a headquarters building that was a living expression of the dynamic LIVESTRONG culture. He took his vision to Ted Flato of San Antonio based Lake/Flato Architects. “In their previous space, they had been cooped up in little offices which didn’t encourage collaboration,” Flato explained. “Lance wanted the new headquarters to reflect his people and their culture. It was important that the new space have an openness, youthfulness and sense of energy. There were to be no private offices, even for their leader.”

It wasn’t long before a 30,000-square-foot former warehouse was discovered in East Austin. Its loft-like space was perfect for fulfilling a dream. “Lance wanted lots of light: no one should ever need a desk lamp,” Flato said. “So we first had to lift off the old roof and design a new one with north-facing clerestory windows to produce a more diffused light.” Lance also wanted the building to be a showplace for the Foundation’s concern for the environment. He asked his architects to focus on this becoming one of Austin’s first LEED Gold certified facilities.

The architects could design an inspiring, collaborative, free-flowing space, but they knew that to achieve LEED Gold, they needed an HVAC system that could help earn LEED credits in the Energy & Atmosphere (EA), Indoor Air Quality (IAQ) and Innovation and Design categories. For this expertise, Lake/Flato turned to another Texas-based company that also had its beginnings in a warehouse (in 1946), TDIndustries (TDI). TDI’s Senior Project Manager Ronnie Swingler presented three HVAC systems and budgets for the architect’s consideration. The first two, DX (direct expansion) and chilled water, were judged to be inefficient or too expensive. The third system presented, VRF, was selected large part because of the design team’s growing awareness of and desire for green and sustainable building, as well as a heightened awareness of improved energy efficiencies.

With VRF selected, Swingler presented the pros and cons for a system from Mitsubishi Electric. 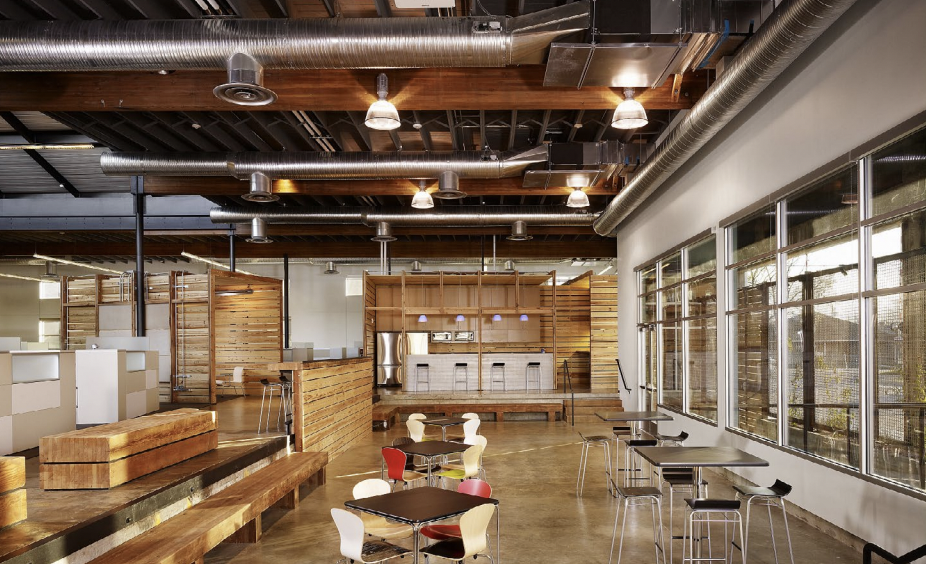 The decision to go with Mitsubishi Electric’s technology came down to a few specifics. First, the difference between the length of the “defrost cycles” for each system is substantial; six to 10 minutes for Mitsubishi Electric’s VRF offering, as compared to 20-30 minutes for the competitor’s system. The shorter cycle results in lower energy costs. The building engineer also liked the fact that the Mitsubishi Electric system, because it is a two-pipe solution requiring many fewer fittings, would require a smaller investment for installation labor and equipment. Plus, the competitor’s solution requires expensive branded fittings. By comparison, installers can make fittings for a Mitsubishi Electric installation, which, according to Swinger, “results in significant cost savings.”

As an intelligent, ductless cooling and heating system, Mitsubishi Electric’s Y-Series VRF was the perfect candidate for this large “open box” design with its smaller, private consulting spaces for counseling families dealing with cancer. Swingler adds, “the Y-Series is a true zoning system with the very latest controls and protocols needed to monitor and operate the individual zones in the old warehouse and perform precise, reliable building management.” Swingler said he has always been impressed with Mitsubishi Electric’s VRF systems which allow numerous indoor air handlers—up to 50 indoor units with the Y-Series—to be connected to one outdoor unit which provides zoned cooling and heating. The owner or operator can always rely on Mitsubishi Electric’s refrigerant monitoring system in each unit to maintain different temperatures in different zones consistently at all times.

TDI looked to design a system that had all the functions requested by the Foundation. Concern for the environment was highest on their list, according to Swingler. “There’s no doubt in my mind that the energy efficiency of this Y-Series system was a leading factor in the Foundation achieving LEED Gold certification,” he said. Also ideal for the open design were other Y-Series benefits like ultra-quiet operation—perfect for sound-sensitive applications where quiet conversation is paramount. Y-Series benefits also include easy installation—little or no ductwork, simple controls and a two pipe configuration—and ductless or ducted options—versatile locations and applications for the indoor units in the open space design.

“Another important factor for the Y-Series selection was the architect’s classic ‘we want HVAC, but we don’t want to see it’’ request,” Swingler said. “Everyone worked diligently to provide cooling/heating without interrupting the design aesthetics of the space. The low-profile, ultraquiet and efficient Mitsubishi Electric indoor units are largely out of sight.

Greg Lee is the chief financial officer for LAF. “We were so pleased with the comfort and performance of the Mitsubishi Electric system in our original space that when we were ready to expand into another 5,000-square-feet of the original shell, it was a natural step for us to simply order more of the same quiet, efficient VRF system,” Lee said. “It made sense to simply expand the existing Mitsubishi Electric system and controls.”

The new LCNC opened its doors in June 2010 to service people with cancer, or at risk for cancer, with an emphasis on underserved populations in the Austin area. The LCNC works to improve access to all available support systems ranging from information and education to financial assistance and family support.

“We are very proud of the many ‘green’ measures we have put into place in the new headquarters providing significant savings that impact operating costs,” Lee said. “In less than two years, we already know that our new building uses 30 percent less energy than a conventional office building and much of that savings can be attributed to our intelligent HVAC system.”