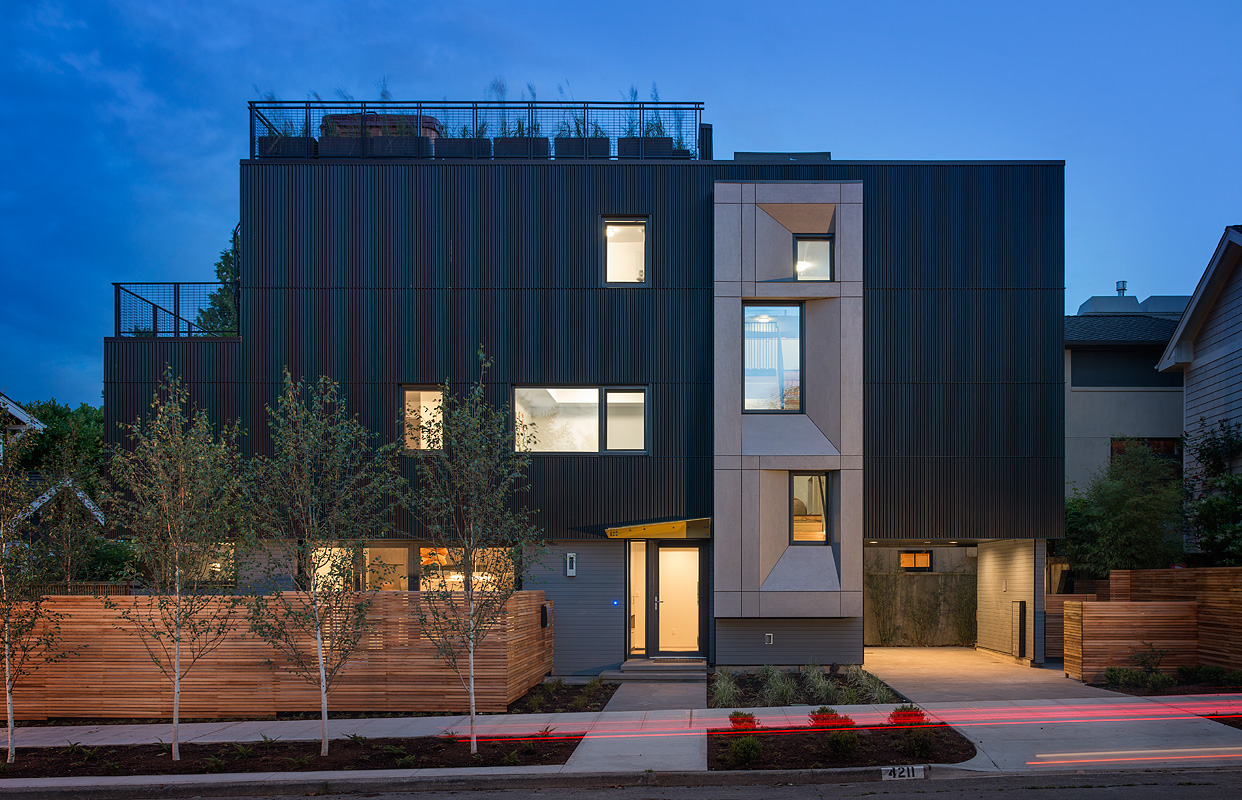 “We’d worked with Mitsubishi Electric before and know it’s well-supported and very efficient.”

Developer Sloan Ritchie and his wife wanted to live in a sustainable home in Seattle. When they found a lot in a beloved neighborhood, they decided to build a Passive House – a structure that complies with the Passive House standard, which focuses on an airtight building envelope, an approximate 90 percent reduction in space heating and an overall 60-70 percent energy reduction. It would be a first for them, and a first for Seattle. The result, called Park Passive, has been so much more than a record-breaking house. For the Ritchies, it’s been a wonderful place to raise a family; for the community, it’s been an inspiration. One of the mechanical systems making this achievement possible is a zoned comfort solution from Mitsubishi Electric.

As the president and founder of Cascade Built, Seattle, Sloan Ritchie routinely attends industry training and conferences. In 2009, he saw a presentation on the Passive House concept. “It seemed super interesting. Other green programs focus on a range – a little bit of 100 different things like recycling and low-VOC paints. When it comes to being green, though, energy consumption is the biggest factor. Passive House is all about how much energy is consumed. It made sense to me to build a house in that way.”

Years later, when the Ritchies then found an attractive but small lot in the Madison Park neighborhood, it seemed like a good chance to see how the Passive House concept would fare in Seattle. “I liked this lot because it’s very, very small, but there was already a 30-foot-tall house to the South, making solar gains challenging. So while it’s a sub-optimal lot for a Passive House, it’s pretty typical for the city.”

Ritchie figured if a Passive House was possible there, more could be built most anywhere in the city.

As with all super-efficient homes, the challenge then became finding mechanical systems that match so small a load despite a larger layout (in this case, 2,710 square feet). Joe Giampietro, the resident Passive House expert of NK Architects, Seattle, explained that in cases like Park Passive, “cooling and heating is operated only as needed, so the main consideration in selecting a system is finding cost-effective, temperature control that can be easily distributed around the dwelling.”

Ritchie and his team debated different types of systems, namely gas versus electric. “We decided we didn’t want to bring gas to the property just for cooling and heating, as all other systems and appliances were electric. So with electric in mind, we liked mini-splits. Mini-splits let you run ducts in multiple directions for the whole house, giving better distribution. This was important to us because we knew the entire house would have a very small heating load, but spread over a large area. So we only needed one efficient indoor unit, but needed distribution on three levels across 2,700 square feet.”

Ritchie’s team handled the installation; “It went just fine. This house has an awful lot of structure to it because of design and lot constraints, and an open floor plan, but mini-splits are pretty straight-forward just run refrigerant outside and figure out where your trunk goes.”

Since the system has been installed, it’s been working well. Ritchie said, “Living in a Passive House is very comfortable. You can wear shorts and flip-flops year-round – much of the time without running the heat. When there are a bunch of cold, rainy days, though, then we use our Mitsubishi Electric system for a few hours – which is enough to keep the house warm for a long time. So the system more than adequately serves our heating load.”

The zoning system also helps Ritchie’s home be the marvel of efficiency that it is. He said, “Our previous house was all-electric and no gas, so a good comparison. When we moved, our house size doubled and our energy bill went in half.”

The homes performance is so impressive that it earned Seattle’s first Passive House certification along with a host of other recognitions like the AIA National Housing Award. Such success has been a boon to Cascade Built. Ritchie said, “The process really transformed my business, and we’re now taking Passive House to multifamily buildings. We’ve continued to use Mitsubishi Electric mini-splits paired with HRVs, like in View Haus 5 and other projects. That HVAC system makes the most sense to me. It’s durable and efficient.”